Well, this is me starting new projects--regardless of any previous promises to finish things before I start new things.  (Seriously: do I even listen to myself when I make promises like that?) 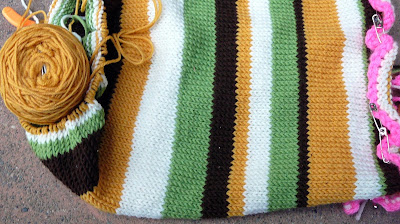 It's fall: Monday Knit Football season.  So I started a knitting project.  You know, a cowl, because the weather's gonna get chilly my sister gave me the pattern!


The pattern is called Pi Cowl, by Emily Williams.  It is a simple tube, knit in the round on circular needles, no increases, decreases (or even purl stitches!), then joined at the end into a bit of a donut shape.  The color changes represent the digits of Pi: three (point) one four one five nine, etc...

So naturally, being such a basic pattern, I figured there would be no new skills to learn.  Wrong!  But no worries: I love learning new things.

First new skill: provisional cast on.  Not too difficult, since I already knew how to wield a crochet hook.  Brilliant additional idea from the YouTube video that I watched to learn this: mark every 10 stitches, so you don't have to keep counting as the cast on progresses toward the requisite 94 stitches. 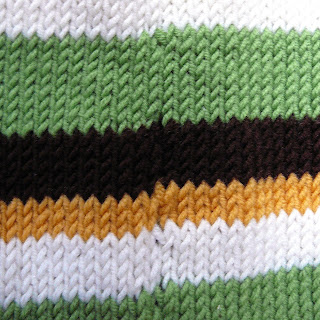 Second new skill: changing colors in the round in a way that looks almost seamless.  Thank goodness for YouTube videos!  The name for this technique is "jogless stripes" and it is not difficult at all.

My yarn colors.  Fun, no?  They remind me of sporty clothing from the 1970's, especially when knit into all those stripes.


Not being well-versed in all things knitting, I didn't realize you can't knit straight from the skein as it comes from the yarn store.  That is a no-no. 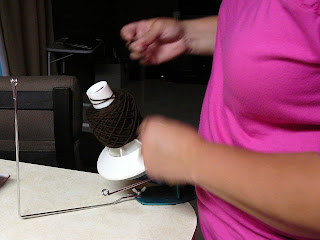 But, that doesn't mean you need to wind your yarn into balls by hand.  The well-equipped knitter (my awesome Sister) has a fancy contraption that winds it all with a few turns of a hand crank.

I was mesmerized watching it.

And the end result is not a ball of yarn, but a cake.  Yummy.

This project will probably last me well into football season.  Just a-knittin' away.

Do you have "football season" projects?  What makes a good candidate for working on while watching (or listening to) sports on tv? 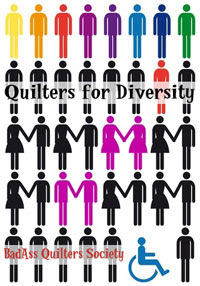 Alla Blanca
I am a creative, nerdy soul. I enjoy all things fabric, but my ADD is a challenge to both my ability to stay organized and to actually accomplish things.